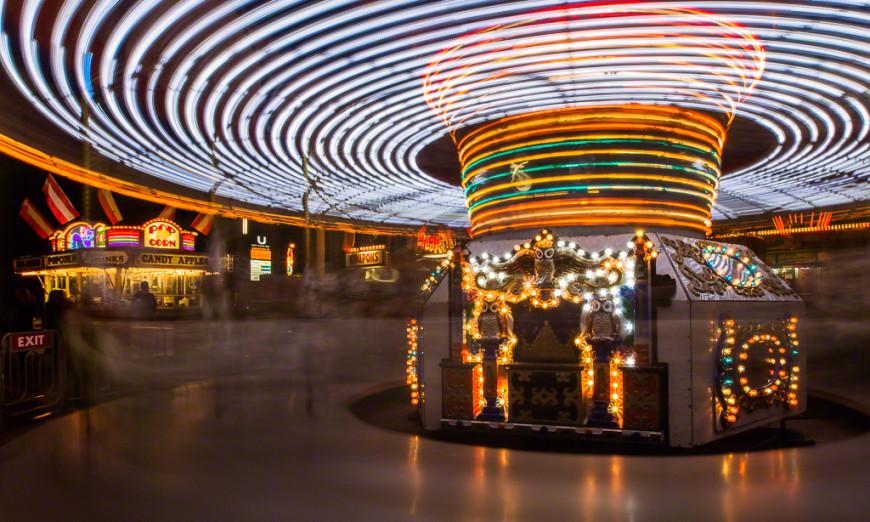 Imagine that you love auto racing. You know so much about it, from how the racers use https://carsrelo.com/ and similar services to get their cars to the races, to the details of the engines of your favorite machines on the track. You buy your ticket, endure the crowds, carry your camera and lenses out to the event, get there early to get a spot, set up, check your exposure settings three times and shoot the races. You have a great time and have made hundreds of images. You get home and import your images from the card to the computer and start to look through them on the big screen. They’re tack sharp, well exposed, nicely composed. You should be thrilled. But something is missing. All the cars look like they’re stationary. Like they were parked on the track. You’ve done everything right, with one tiny exception, you’ve lost the feeling of movement that made the race so exciting. 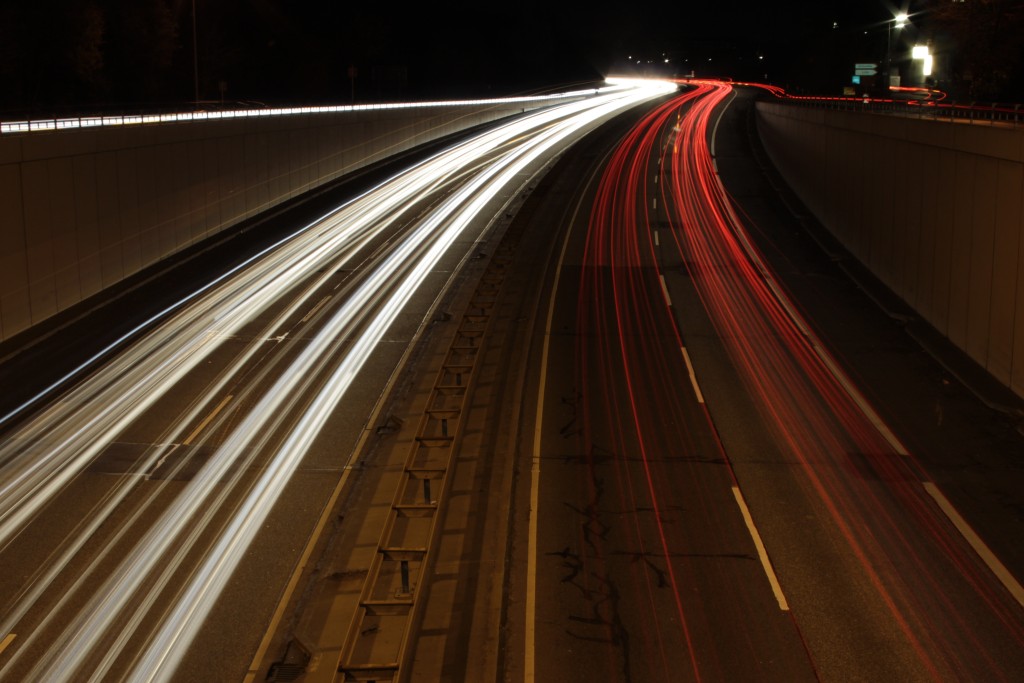 If you’ve ever felt this way, with any kind of moving subjects, you aren’t alone. Certainly having the right gear and being in the right place and time, as well as knowing the subject are not options, they are the table stakes. But what to do once you’ve got a seat in the game.

What makes watching the event exciting? Motion has dynamism, and it doesn’t matter what kind of motion you photograph, if the dynamism goes missing, you may have great shots, but they’re going to run the risk of being boring. Let’s work on preventing boring. 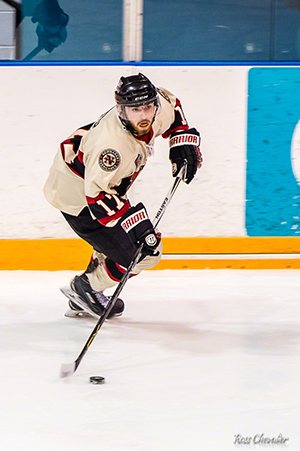 The skates and stick show motion while the face is sharp.

When you are going out to shoot, be it hockey, or auto racing, or polo, or figure skating, what makes these events special is the magic of the motion. What you want is a nice sharp photo, that also shows that motion is happening, and so communicates the magic of the event to the viewer.

Fortunately it’s not that hard. You will need a camera, a lens suitable to the event so you can fill the frame, an understanding of the event and the willingness to come away with images that don’t work. You should also try to have some form of stable support such as a high quality monopod and also have a loupe so you can easily see the LCD. I strongly recommend the Hoodman Loupe with the accessory 3x magnifier. Once you use one, you’ll wonder how you lived without it. For very long exposures such as the night sky, or a waterfall, you will want a tripod and a simple cabled release for your camera. A cabled release has no battery demand, and unlike a self timer, the shutter goes when you press the button on the release. No fuss, no muss.

First, get yourself to that place where you get nice clean sharp images with solid exposures. Now take note of your settings. Where you want to go next is to allow for some subject movement to some extent. Let’s suppose that the settings from a successful image are as follows. 300mm lens at f/5.6, shutter speed 1/500 and ISO 800. We still want a good exposure, but we want to allow for a bit of subject movement. This is pretty powerful for hockey, polo, swimming, figure skating and the like where the subject is moving, but not super quickly. Change your settings to drive a lower shutter speed, either by shooting in Aperture Preferred and changing the aperture to f/16. This will give you new overall settings of 1/60 at f/16 and ISO 800. Now I understand the concern about camera shake when your shutter speed is less than 1 over the focal length of your lens, but it’s 2016 and most lenses have some form of image stabilization and when used with practice that can give up to 4 stops of slower shutter speeds. And even if your lens does not do this, try this anyway. Make some shots and examine them zoomed in on the LCD with your loupe. Is there blur due to subject motion? Are parts of the subject sharp and parts blurred, such as the skater’s feet? Let’s say you photographed a waterfall. Are the rocks sharp but the water creamy? Play with the shutter speed until you are able to get the kind of blur that you want with consistency. It will come quicker than you think.

Now let’s kick things up a notch. Take your camera, lens, tripod and cable to your town’s main street at night. Set up the camera on the tripod, set the ISO to 100 or 200 and the lens aperture to f/5.6. Set the camera shutter speed to the B setting. This means Bulb, and why this is so is a neat story, but we don’t the time and space for that right now. Manually focus on the midpoint in the road from a safe place. Give yourself a nice wider angle of view such as with a wide angle zoom or wide angle prime. When the cars start moving, press and hold the button on the cable release. Count to 5 and let it go. Check the LCD. You’ll now have some motion blur of the cars and their lights, but the surroundings should be sharp. Too dark, try again and double the time you hold the button down. Too light? Change the aperture to f/8 and try again. Keep going until you find an aperture and button hold down time that works for your scene. Now make a bunch of images. You’re making stuff that isn’t boring and you get better at knowing when to press and when to release the more that you practice. 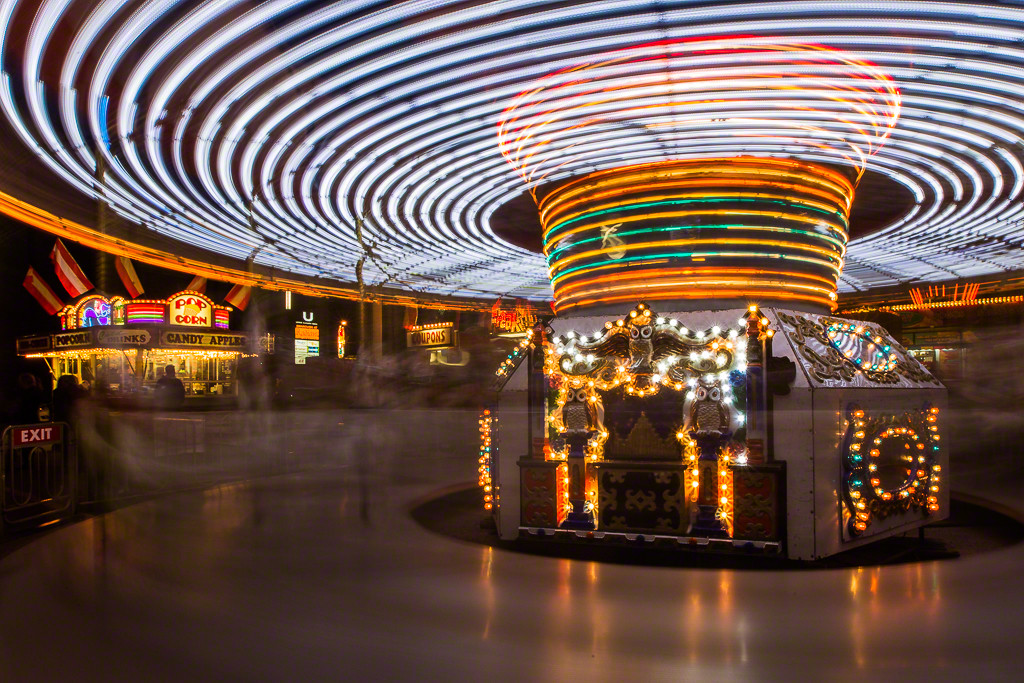 Can you see the horses? They’re there, but they are blurred to show the motion of the Merry Go Round.

If you want to shoot a waterfall in daylight, set your camera and lens on a tripod, make your composition and connect your remote release. Now close down the aperture to the smallest opening that your lens can deliver. Set your ISO to the lowest numerical ISO your camera can do. Put your camera in aperture preferred mode. Your camera will now select the appropriate shutter speed for the scene. At this point, I like to set my focus and then put the camera into manual focus. Take a shot and check it. Hey! What happened? The water isn’t all creamy like I see online! This is because a waterfall shot in daylight won’t give you a slow enough shutter speed to make the water really creamy. The Sunny 16 Rule tells us that at ISO 100 at f/16 on a sunny day, our shutter speed is going to be 1/100. Nice sharp picture but boring for waterfalls. If we close the lens to f/22 we drop the shutter speed to about 1/50, which is still not slow enough for good water motion blur. This is where you add a Neutral Density filter. Personally I prefer the fixed reduction ND filters unless one is willing to spend well over $400 for a Heliopan variable. That’s a lot of money, and personal experience continues to show that inexpensive variables produce muddy colours and sap contrast. If you were to buy a 6 stop ND filter for your lens, simply by putting it on the lens in the scenario noted, you would drop your shutter speed to about 2 seconds, good for some decent looking creamy water when the water is moving fast. Adding a 10 stop neutral density filter will get you a shutter speed of 30s, about the longest that most cameras can do. I guarantee that the water will be beautiful. You do have to make sure that you are using a good tripod that is nice and stable and releasing the shutter using your trusty cable release. Please also note that dark Neutral Density filters will probably make the autofocus system go nuts, so manually focus and lock it down before you put on the ND filter. 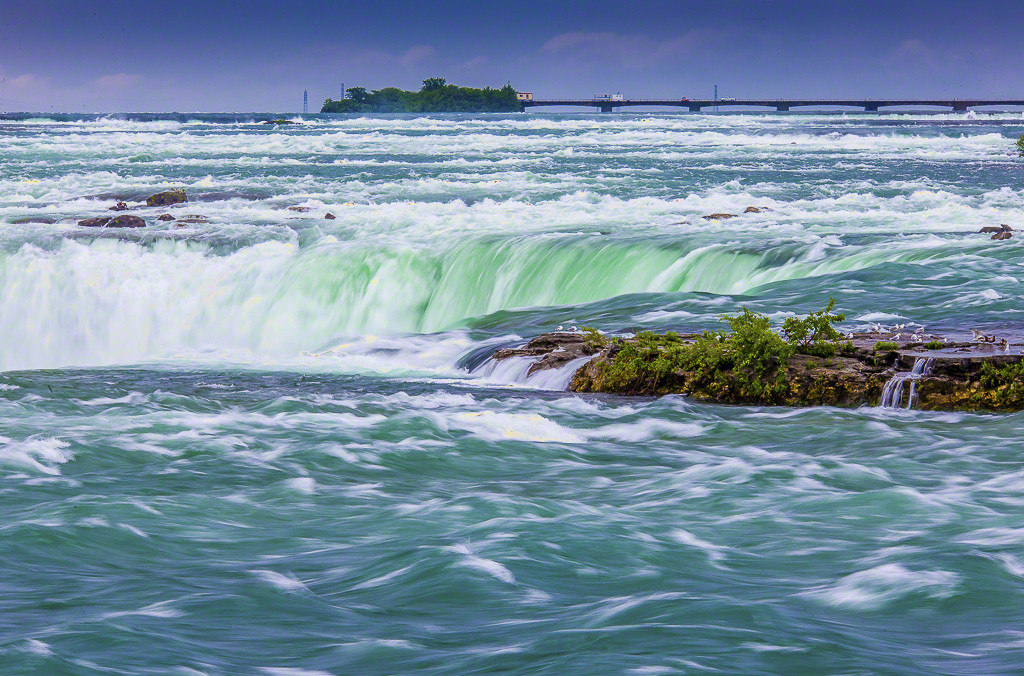 Shot at 2pm on a bright day. Using a 6 stop neutral density filter dropped the shutter speed enough to allow the water to move.

If you try these ideas, you’re going to be able to make much more interesting photographs that show the viewer the movement that made the subject interesting in the first place. 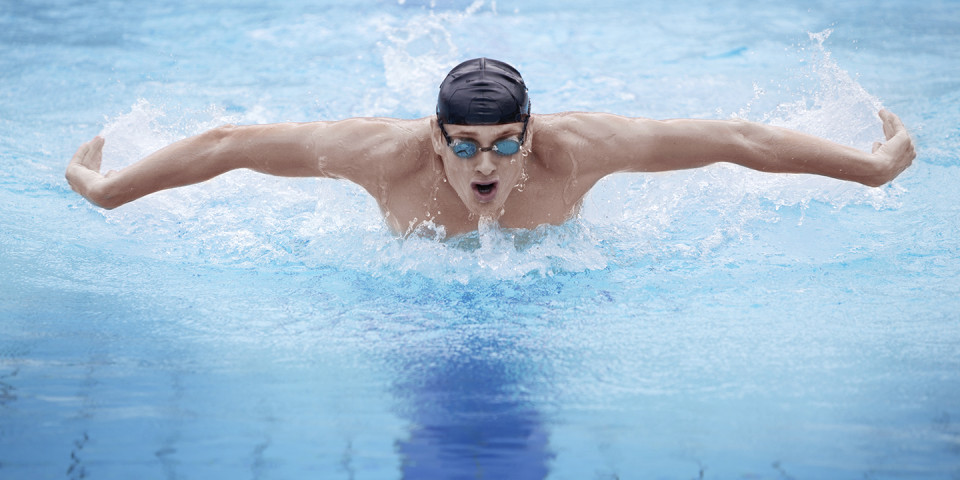 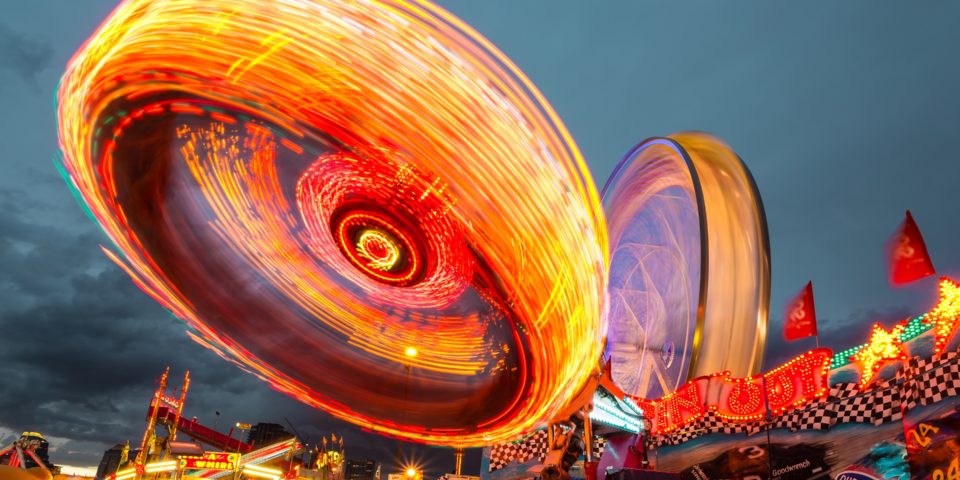 Taking Photos At The Fair