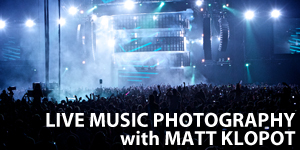 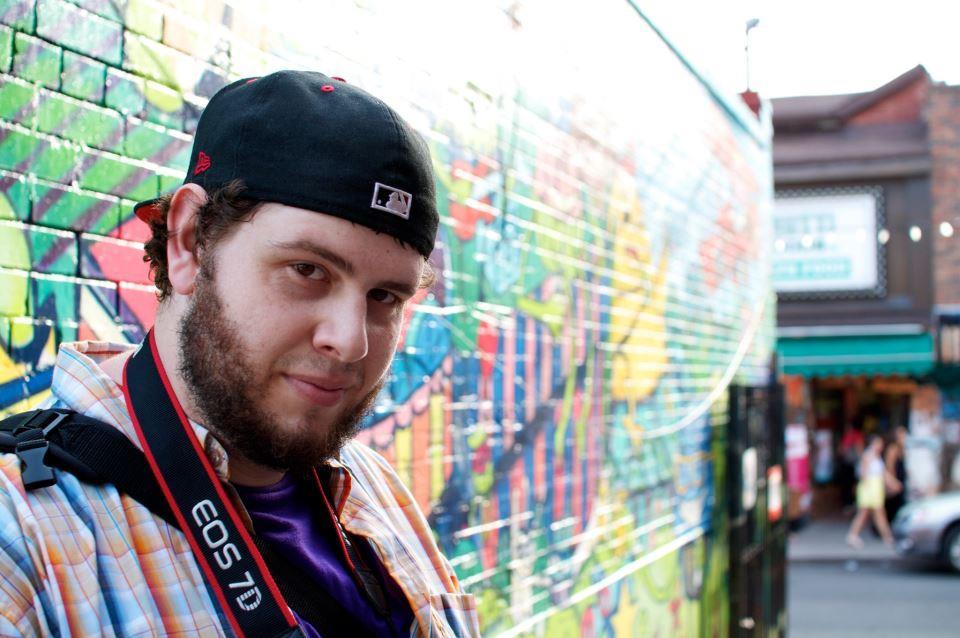 Hello, my name is Matt Klopot and I am a music photographer living in Toronto, Canada. I have always been a very visual person. I was into web and graphic design in my early teens and then moved over to video in high school, which eventually became my career. About 3 years ago I was getting the itch to try taking pictures, as I had a few friends who were photographers. I saved up a bit, bought an entry-level DSLR, and instantly fell in love with the medium.

My love of music photography is due to a few factors. First and foremost, I am an incredibly shy person. I find it hard to interact with other people. I completely bombed trying to shoot portraits; I was rubbish at directing and interacting with the subject. With concerts, I have no interaction with anyone. I am simply capturing the moment as it happens. Being a musician most of my life and a music lover from the womb, I love concerts. I love the atmosphere, the vibe, the energy and the amazing feeling of being in a room with hundreds, or thousands, of people, all jamming on the same song, seeing the best drummers of all time perform their very best, seeing it all come together. I try and capture that as best I can because I know that’s why so many other people love concerts too. When I go to take photographs at a concert, I think of all the people that couldn’t be there. They deserve to see some high-quality pictures of the artist performing. As some concert venues check IDs, I think of capturing the experience in photos for those too young to attend. Although, most younger people would find a way into the venue these days. They’d probably arrange to purchase a fake ID from id god, or somewhere similar. That would give them access into the venue if they are checking people’s ages. Some people will do that, whilst others will resist and won’t attend. Hopefully, photographers’ pictures can make those people feel like they did attend the concert.

When I was just starting out, I had an amazing friend who was mentoring me, showing me what’s what. One day she said “What do YOU want to shoot?” and the first thing that came to mind was concerts, so she said, “alright, go shoot a concert”. I posted an ad on Craigslist looking for a show to shoot, and a band contacted me to shoot them in a little hole in the wall off Bloor Street. I went, took some pictures that I can now, 3 years later, admit look like crap, but at the time I thought was amazing. I really dug capturing the moment. From there, I was hooked. I found more local holes-in-walls to shoot in and really got to learn by doing. Eventually, my photos got better, and an online magazine contacted me about using my photographs for their publication. Two years later, I am now the lead photographer for that publication, and have shot over 80 bands for them. 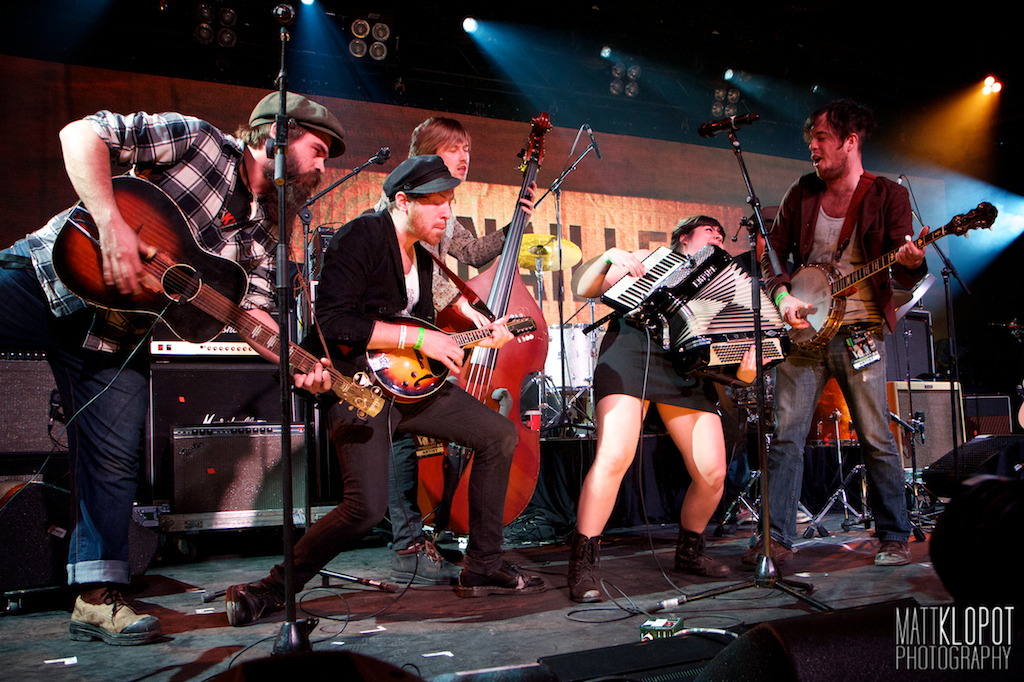 For me, photography is such a personal experience. It’s incredibly hard to emulate another photographer without simply copying what they did. My inspiration when I get into the pit is simple: capture the moment. Capturing what the audience sees is all I am thinking about. From the lighting to the energy, to the sweaty singer. That’s why you will rarely see any of my photos in black and white. The stage is full of color, so I feel I would be doing a disservice to strip the image of that. 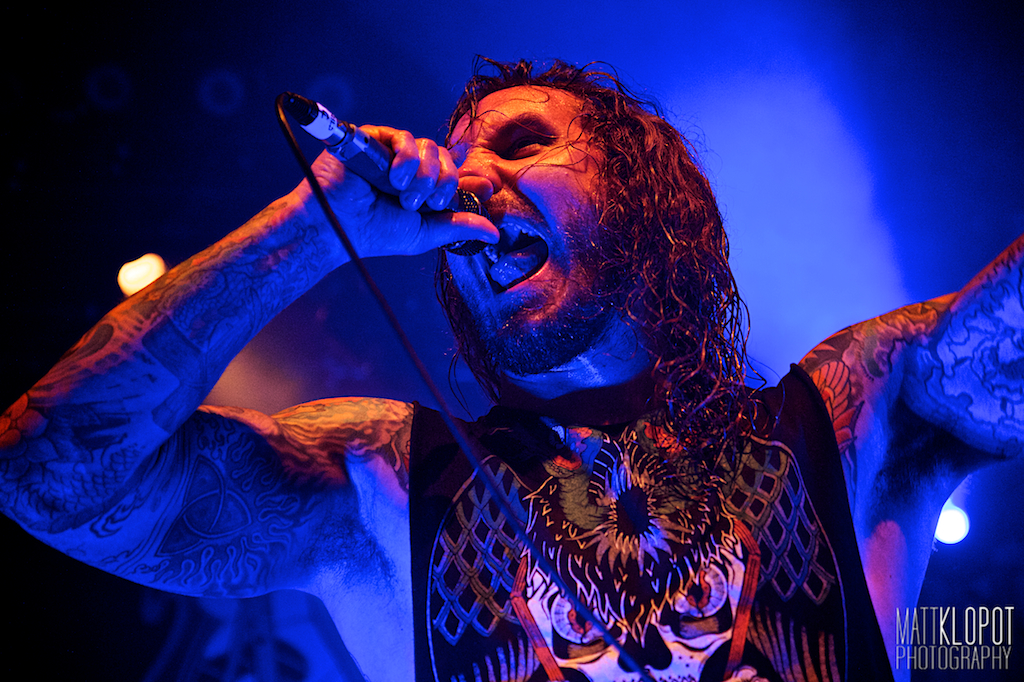 I pretty much bring the same gear to every show. My main body is a Canon 7D which I have nicknamed Shirley. My main lens is a Canon 17-55 f/2.8. It allows me to go wide when I need to, and get pretty close as well, plus its sharp as hell! My #2 is a Canon 70-200 f/2.8. The 70-200 is one of the greatest lenses I have ever used. It’s as sharp as I could possibly ask for and has never let me down when I go in for those gorgeous close-ups. When I know the club is going to be dark, I usually stow a Sigma 30mm f/1.4 prime, but for the most part, it stays at home these days. A few things I never leave home without are an extra battery, extra CF card, press pass lanyard, business cards, gum, and the most important – earplugs. Earplugs are something not everyone thinks about, but you will kick yourself the next day when all you can hear is dubstep in your head. All of these toys fit nicely in my Crumpler 7 Million Dollar Home. 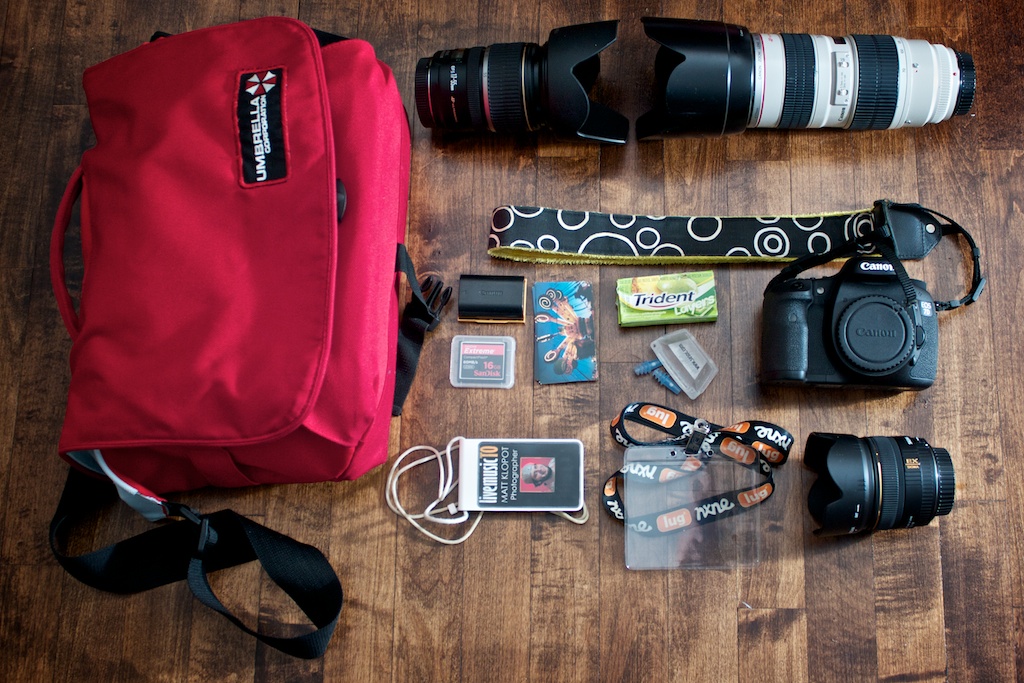 Staying safe in the pit isn’t always easy. Sometimes I’m in there with 20 other photographers, and we only have 3 songs to get all the gold we can before we’re ushered out of the building, so we are very competitive for vantage points. I have seen many an elbow thrown. Being 6’3″ and rather large definitely works in my favor. I can easily plant myself, and my height allows me to shoot over shorter photogs. That being said, the Toronto Music Photographer community is a pretty special one, we are all friends, and try to share the best spots as best we can.

When I am in the pit, I have two goals; to get the shot, and to get out without damaging anything. It’s hard to forget that when I enter a pit, almost $5000 of equipment is coming with me. I try to be mindful of my surroundings. Luckily I have invested in pretty decent gear, which is built to last. I recently saw a video on YouTube where a 7D was subjected to rain, falling down a flight of stairs, getting hit by a truck, getting frozen, and engulfed in flames, and still worked, so I breath a little easier when I bump into the stage. 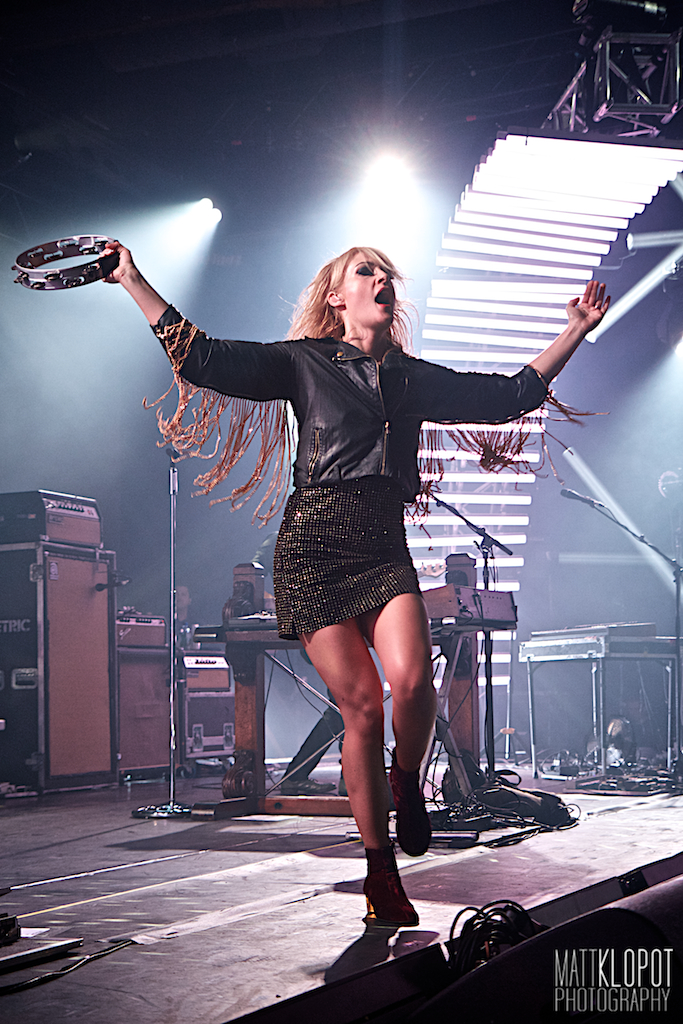 I shoot because I love it. No one in music photography is making a fortune; we all do it because it’s fun, and it beats shooting anything else. Shooting for a publication means they publish my work and tens of thousands of people see it, which is pretty amazing. I usually like to post what I shoot on Facebook and Flickr.

If you could shoot any band/performer in the world, who would it be, and why?

For me, I like to shoot what people want to see. I love it when I log into Flickr and a photo I shot has received a few thousand views overnight because it was shared all over Tumblr or Twitter by a fan of the artist. When I send in my requests to my publication, I choose artists where my photos will have an audience. I think the top of my list right now is Justin Bieber.

If you could offer only one piece of advice for future live music photographers, what would it be?

I get asked a lot about how to get started in concert photography. Everyone’s route is different. From getting in touch with publications to shoot for a magazine and going to local shows, to even trying to reach out to local bands with the use of an instagram messenger (as they are more likely to reply than bigger artists like Beyonce), for example, there are so many avenues that people can try in the hopes of starting out in concert photography. But if I could only give one piece of advice, it would be to watch and wait. Whether you’re in the pit at the Air Canada Centre, or front row at Sneaky Dees, you’re taking pictures of musicians, and musicians are creatures of habit… especially seasoned ones. Watch what they’re doing, and follow the patterns. 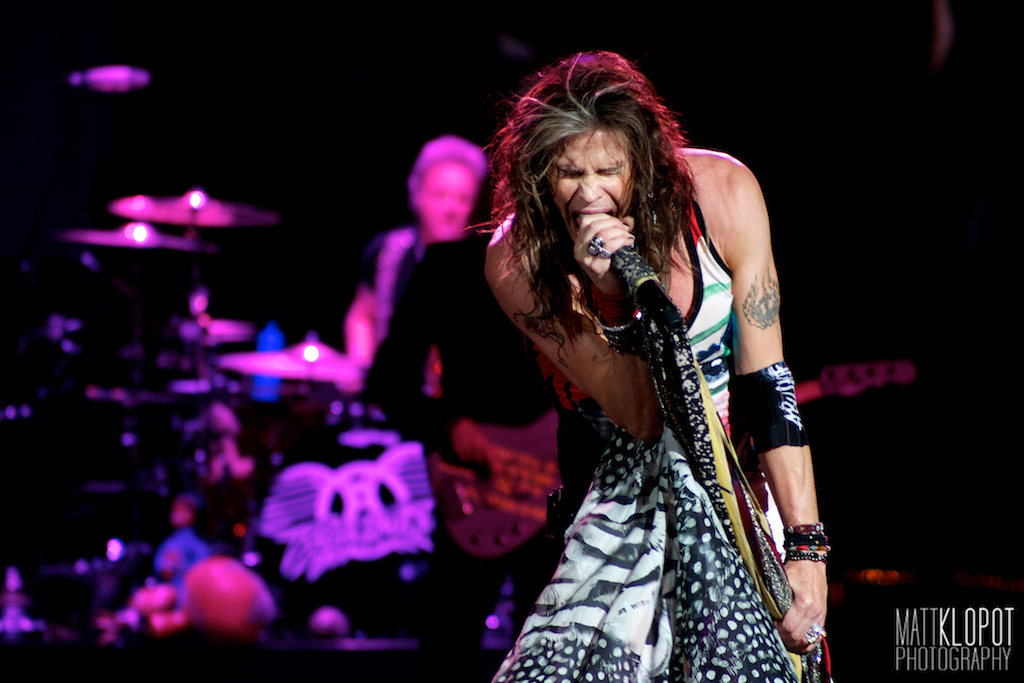 If you want to shoot live music, then go shoot live music. I get the question “how do you get to shoot concerts?” a lot, and the answer is so simple it’s stupid: by shooting concerts. Start small, and as you get better, bigger doors will open to you.

Matt’s live music photography certainly is impressive. Like many others, he started from the bottom and worked his way up through hard work and determination. His is a great story that just goes to show that perseverance truly can move mountains, and I can’t wait to see what mountains Matt moves next. If you want to see more of Matt’s great photos, check out his website. Feel like getting in touch with Matt to perhaps ask him some more questions about his photography? Follow him on Twitter and check out Matt’s Facebook fan page – I’m sure he’d love to chat with you!

Do you know a Canadian photographer who’s made a name for themselves in their field? We’d love to hear about them, and give them some well-deserved recognition on the Henry’s Blog. Let me know in the comments or drop me an email!

Matt is a live music photographer living and working in Toronto.

Matt is a live music photographer living and working in Toronto. 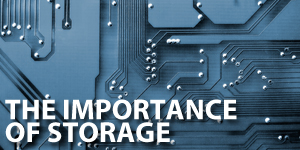 The Importance of Storage 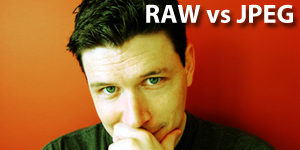 JPEG vs RAW – Capturing or Creating?